Boxed in a Corner

I began with the intention of finishing my "take-out box" purse. Pattern was made, fabric cut out, and ready to sew. For some reason another fabric was just calling my name, and as I approached it I just saw the perfect tote! So, I set the one aside and started the other (don't we always do that?).
I thought a wrap purse would be so easy, and set about making the pattern. Using Swedish tracing paper, I soon had one cut out, folded, and ready to begin! For the next hours I happily sewed away. The first part was a cinch - follow the pattern and sew. Just one giant "octopus". I turned to the right side and began folding for the final steps.

Doubts began to creep in.... just slowly. It folded easily enough and the folds were going to make some lovely pockets. Actually 4 in view and then 4 tiny hidden ones. I was excited to finish!
All folded, pinned, and ready to sew. Began putting the first seam under the foot and that is when it hit me! I had boxed myself in - literally - and had to start inside the purse and at the very bottom - with all four sides pinned. My heart sank as I thought of the 8 seams that had to be sewed while fighting with keeping seams straight, flat, and trying to see what I was doing at the same time. No, I couldn't open anything up to lay flat. Through some struggles and lots of pin-sticking! I finally had the sides and folded flaps sewn. What was to be a very easy fold and sew, was certainly not the best design at all!
The only smart thing I did was use BERNINA Edgestitch Foot #10 to finish the edges. 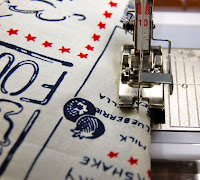 I added grommets to each side, braided some lovely wide ribbon and tied them in each side.

Lesson learned? Think about the process and the steps, along with the folding process, and begin again!
The "take-out" purse? Ready to sew tomorrow and it WILL fold nicely!
Happy Stitchery!
Charlene
Posted by Charlene 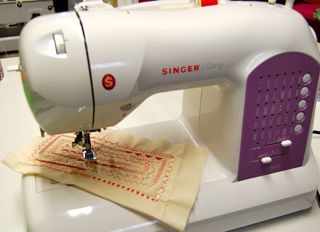